In 1981, forty years ago, Post It Notes debuted as did Frequent Flyer Miles. The inaugural flight of the space shuttle program was completed. Raiders of the Lost Ark played in theaters. Sandra Day O’Connor became the first female Supreme Court justice. And both Britney Spears and Justin Timberlake were born, which means they would just miss being eligible for the 2021 Fortnightly Under Forty. 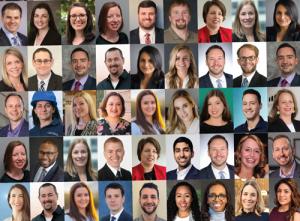 Are you on the fast track at your utility, utility association, state utility commission, state consumer advocate, vendor, professional services firm, et cetera? Are you one of the up-and-coming? Hopefully your co-workers have noticed.

Because it’s that time of the year again. Time to nominate the young guns for the Fortnightly Under Forty to be featured in the June 2021 issue of Public Utilities Fortnightly.

Nominations are due as usual by Albert Einstein’s Birthday, March 14, pi-day. Well, actually they’re due by the Ides of March, March 15, since 3.14 is a Sunday this year.

That’s a little less than three weeks from today. So get going on this. Write no more than five hundred words on why your Einstein is destined for success in the utilities industry, including in utility regulation, and send those words to Alexandra Revel, arevel@fortnightly.com. She’s got application forms for the asking.

Up to ten nominations from any utility, association, commission and so on. We hope you’re one of the ten from your organization.