We received this nomination for the Fortnightly Top Forty Innovators, for Sharon Allan, chief innovation officer for the Smart Electric Power Alliance. 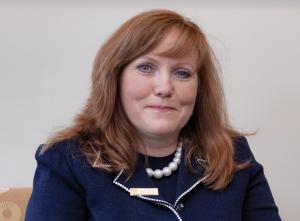 "A familiar name in the public power sector, Sharon has long been recognized for her visionary leadership in development of the North American smart meter market as well as her tenacious advocacy of grid-modernization technology and policy. An industry reporter once likened Sharon to the unsinkable Molly Brown on six cups of coffee.

Under Sharon's leadership during this past year, the Smart Grid Interoperability Panel team was entrusted by the U.S. Department of Energy to support four of the Grid Modernization Lab Consortium projects. Now, the team is working with multiple national labs and industry representatives to execute on these initiatives.

To help make solar deployments more affordable, Sharon's team has been spearheading industry participation in the DOE OrangeButton program, which reduces the transaction costs between companies in the solar value chain by standardizing data interfaces...

Today's systems remain separated by silos, with meter data going to AMI systems, SCADA data to SCADA systems, load control devices to load control systems and so on. This has resulted in much system-to-system integration, plus it requires monitoring and the occasional round-trip as data travels from the field to the enterprise and back to the field again. OpenFMB facilitates data exchanges closer to the edge of the grid and will thereby enable a more distributed approach to grid management.

Through this past year, Sharon also has supported industry collaboration by bringing utilities together to discuss and chart out their changing system requirements as they face increasingly high penetrations of DERs. She has been leading an effort aimed at helping utilities identify and unify their requirements so that an open dialogue can be had with the industry players who must design technology to meet utility needs."

As we've said, everyone making the Top Forty will have distinguished themselves during the last year, serving the public interest. Invented costless clean electricity generation? That would do it.

Or you could have developed or advanced the adoption of a technology, application, method, regulatory approach, or public policy that has the potential to serve the public interest. Understanding that such projects are predominantly the product of groups of people, rather than lone wolves like Nikola Tesla, a nominee can be an organizational or project leader that urged and stirred action and achievement.

The Top Forty issue in November will be a big deal. Interviews. Photos. Audio. Video. It will highlight some of the most outstanding leaders in our field. Like - perhaps - Sharon Allan.

The now twice-per-month magazine for commentary, opinion and debate on utility regulation and policy, Public Utilities Fortnightly. In PUF, impact the debate frequently.