Saluting the IBEW and Utility Workforce

That's the title of the cover article in July's Public Utilities Fortnightly. As a part of PUF's salute, this is an excerpt from July's From the Editor column, "Resilience is Their Middle Name": 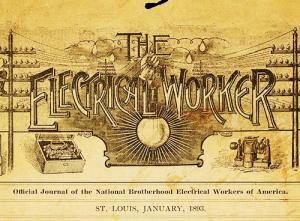 "When snow and ice covers our communities, or when a hurricane hurls through, the utility field workers are out there first. Literally, as soon as the wind speed recedes to a set miles per hour. Ask linemen what's most rewarding about their job. They'll inevitably relate a story or two or three about when their perseverance provided the restoration of power to a community and the sheer joy of the people there.

And now comes a pandemic. This plague has forced upon us such a complete change in how we work and live, comparable only to the change when world war struck eighty years ago. Much of the public huddles inside their homes across the hours of the day and week, ever more dependent upon the uninterrupted provision of electric power. While the utility workforce — their tasks complicated by exposure to the sickness and initially, shortage of protective supplies — is out there once again, for us.

With the support of their utilities, they truck around by themselves rather than in crews. They meet in small groups so that if one does get sick, few others must be pulled from the job and quarantined. In some cases, they actually leave their families and live at the plant, in makeshift dorms, for weeks at a time, to ensure there's someone always there to keep the lights on for you and all of us.

This, on top of everything else. The utility workforce must not only concern themselves with getting the job done with care, consistently, but also with a continual adherence to safety. Because, let's just say it, they are often in dangerous situations in which a distraction can lead to a disaster. That is exactly why Henry Miller formed the International Brotherhood of Electrical Workers, the IBEW, at a national convention that met in St. Louis back in the year 1891.

A year before, Miller was a lineman for the Municipal Electric Power and Light Company (now a part of Ameren) when that town hosted the St. Louis Exposition featuring electric lighting. Which naturally attracted a lot of linemen from the midwest, inspiring Miller to build the brotherhood.

Working conditions and safety were always on his mind. So, it's ironic that Miller too succumbed to the dangers of line work a few years later. In 1896, Miller was now a lineman for the Potomac Light and Power Company in Washington D.C. (now a part of Exelon). He and a partner were repairing a circuit that had been damaged by a summer storm, at the corner of Wisconsin Avenue and Newark Street in the Cleveland Park neighborhood, walking distance from where I'm writing this. Miller received a shock, fell from his ladder, and died hours later.

A close friend and member of Local 17 (Detroit) said this:

"We well remember when he [IBEW founder Henry Miller] came to Detroit to organize us. He rode the bumpers of a freight train to get here and had no fund for organizing. When we took up a collection for him at the close of the meeting, we fairly had to force him to take it. 'No, boys,' he said, 'you will need all the money you can get together for your union. I will get along some way.' ... I am reminded of a verse of Longfellow: In the world's broad field of battle, in the bivouac of life, be not like dumb, driven cattle; be a hero in the strife."

At this challenging moment in our nation and world, these are inspiring words for many of our endeavors. And, we are similarly inspired by the essential contribution to our well-being by the IBEW membership and utility workers. It is therefore quite appropriate that at this time, we take the time, and salute these great men and women."