You can read it in the February 16, 1933 issue of Public Utilities Fortnightly. If you recall, that was a great issue. The lead article was written by U.S. Senator Hiram Johnson (Republican – California). He had been the Vice Presidential candidate in 1912 for Teddy Roosevelt’s Bull Moose party, which was before my time. 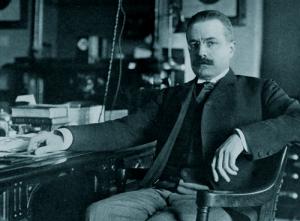 Another article discussed the founding of a new organization, the Edison Electric Institute. EEI is today’s association of investor-owned electric utilities. The National Electric Light Association had been the organization for the industry. But NELA lost credibility with much of the public amid the Depression-fueled business failures and scandals of that time.

EEI’s founding was lauded by the press. Especially the new organization’s professional and ethical ideals. The article in PUF, “A New Deal in Kilowatts,” quotes the New York Times, Wall Street Journal and others.

The July 6, 1933 issue of PUF followed up. An article there discussed EEI’s founding convention in Chicago during the week of June 5. Its founding president, George Cortelyou, stated EEI’s goals. Exchange information and experience. Formulate standards based on best practices. Represent the industry to other national bodies.

George Cortelyou (his birthday we celebrate on July 26) was also president of Consolidated Gas Company, which is now Consolidated Edison. But why was he one of the most famous Americans at that time?

At age thirty-three, he went to the White House as chief clerk to President Grover Cleveland. Then Cortelyou continued there as personal secretary to President William McKinley. But his life and career soon changed.

On September 6, 1901, while in Buffalo, President McKinley was shot twice at close range by an assassin. The President collapsed into Cortelyou’s arms and whispered “My wife… be careful, Cortelyou, how you tell her. Oh, be careful.”

The new President, Teddy Roosevelt, gave Cortelyou the responsibility to organize the White House. The Office of the President to this day continues many of the procedures Cortelyou developed. Particularly for press access.

Cortelyou went on to become Secretary of the Treasury. It was Cortelyou that advocated the reforms in monetary policy, after the searing Panic of 1907, that led to currency flexibility and ultimately formation of the Federal Reserve in 1913.

He then came to our industry. And eventually founded EEI. Which is how George Cortelyou found his name in the pages of PUF.