Commissioner David Lilienthal, whose birthday is July 8, wrote a PUF article while at the Wisconsin Public Service Commission. 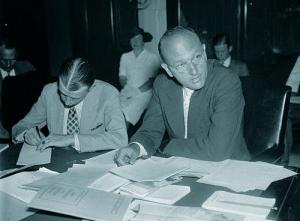 He later became one of the nation's most influential utility regulators, then a key leader of President Franklin Roosevelt's Administration on energy matters, then the chairman of the Tennessee Valley Authority - he was really the driving force in TVA's creation — and then the first chairman of the Atomic Energy Commission.