Calvin Butler, Exelon Utilities CEO, talked with PUF about Exelon's initiative to electrify their transportation fleet. Exelon has committed to electrify 30% of their fleet by 2025 and 50% by 2030. 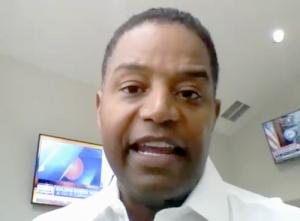 Calvin Butler: We're going to be a leader in the industry, in taking our efforts to the next level of cleaning up our communities and making an impact on reducing greenhouse gas emissions. For our communities that we serve, this is so important. We know our states have goals to meet, and without electrifying the transportation industry, they won't achieve them. As a utility, we know the importance of leading by example.

PUF: We do have to electrify the transportation fleet nationwide.

Calvin Butler: Transportation represents another third of greenhouse gas emissions. States will not get to their goal if they do not electrify the transportation industry.

And we know that means a lot to them. Because we hear the mayors and the governors talk about what they're trying to do. This is our effort to lean into that effort and help them to get there.

And we're being very intentional about these efforts. This involves not just replacing the vehicles with electric, it also involves putting the infrastructure in place to get this done, the charging infrastructure.

And then what else are we doing? We're providing rebates and incentives for our customers to purchase electric vehicles.

We're sitting back saying, what are all the things that we can do to encourage the communities and our customers to lean into this effort as well? It's much more than just about us replacing. It's also about providing the right infrastructure, the right incentives, the right rebates within those communities and working with our commissions to get that done.

PUF: What feels most good about this initiative?

Calvin Butler: I think what feels good for me personally, is that Exelon is stepping up to walk the walk.

We have the cleanest [powerplant] fleet out of all the utilities with our nuclear plants and the like. We produce twelve percent of all the clean energy in the U.S.

But this is another step to make an impact on those communities at the local level. This is our effort to say, governors, mayors, we hear you. We're going to put our money where our mouth is, and we're going to make this commitment to getting it done.

That's what I'm most proud about. It demonstrates that we're listening. And we're being active listeners in that process.