In the final years of the Cold War, the first Cold War that is, the one that ended in 1991, I recall feeling that our country would ultimately win because of women. That as women were finally being empowered in the eighties to compete for important roles in our society, our capitalistic system with its meritocracy would become more productive and more innovative. 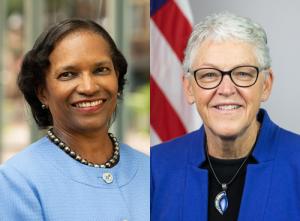 As it turned out, we did win that Cold War as Russian communism crumbled. And women have indeed succeeded so well in so many important roles that would have been very hard to imagine back there in the eighties.

In our industry certainly, women side-by-side with men have driven energy and water utilities to be nothing less than dynamic change agents for society’s toughest problems. While simultaneously keeping up the reliability and keeping down the cost of utility service. (Though this latest run of high natural gas prices globally, Russian-inspired I might add, is a real challenge.)

The energy in women, specifically those in energy, is fostered and celebrated by the Women’s Council on Energy and the Environment. WCEE is a tremendous organization which just happens to be holding its gigantic 2022 awards reception next week in Washington D.C.

If you’re in the neighborhood October 27, you ought to consider stopping by. It’s after work, at six to eight in the early evening. Registering is easy, at wcee.org.

This year’s Woman of the Year goes to both Brenda Mallory, who chairs the Council on Environmental Quality, and Gina McCarthy, who was until recently the White House National Climate Director. And the Sparks Award for innovation goes to Esther Wozniak of Pew Charitable Trusts, Jennifer Morrissey of Dentons, and Samantha Childress of Schneider Electric.

And the Champion Award goes to Ralph Cavanagh of Natural Resources Defense Council, and last and least to, well, me. Which seriously is a huge honor for a guy who has considered, throughout his long career, so many distinguished women to be among the best of the guys.