February 11 is the birthday of Thomas Edison. February 10 is the birthday of Edith Clarke. Clarke is not as well-known as Edison, but she was the first female electrical engineer in the U.S., and she made long-distance transmission feasible. The anniversary for her breakthrough is also this week. 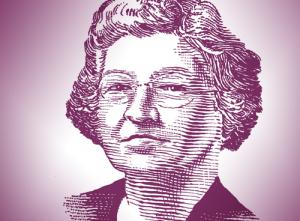 In 1926, on February 9 of that year, the front page headline story of the New York Times was that the federal government opposed the merger of baking companies that it called a “bread trust,” a conspiracy to control the nation’s bread. Other above-the-fold articles reported on the Swedish surgeon who sung operatic arias – as an accomplished tenor – while wielding the scalpel, Long Islanders welcoming home former President Theodore Roosevelt and family from their big game hunting expedition in Asia, and the outburst by Italy’s Fascist Premier, Benito Mussolini, about democratic Germany and that country’s threats against Austria.

If you turned to page fourteen of that day’s Times, an article entitled Woman Addresses Electrical Institute could be spotted, just above a short piece on the sentencing to seven years in Sing Sing prison of a man who intended to bomb a Mussolini-supporting Italian newspaper, and below that, a Phillips Milk of Magnesia advertisement. The remainder of page fourteen was mostly taken up by ads for a society tailor, Chesterfield cigarettes – “men have learned they can depend on Chesterfield,” and New York Central’s and Southern Pacific Lines’ long-distance trains, in the latter case through the southwest – “California is still the paradise of the winter vacationist!”

Elsewhere in that day’s Times was the report that a man named Charles Ponzi was indicted in a Florida real estate scheme to repay massive indebtedness to investors who lost money in his earlier schemes. And the report that the Delaware state militia, with machine guns in hand, hurled tear gas against protesters angry about a “negro” found guilty (a judgement the protesters believed wrongly decided), who will be hanged in a little over two weeks for attacking a twelve year old white girl.

Also in the paper that day, a story about the Racial Integrity Bill introduced in Virginia’s Legislature, which would broadly classify people as coloreds and forbid their marriage to whites. In an adjoining column, there was the story of five “Canadian beauties,” recent winners of a Montreal beauty contest, that were touring Manhattan.

Turning back to the page fourteen article, Woman Addresses Electrical Institute, the article’s subtitle announced, Miss Edith Clarke the Only One of Her Sex to Read a Paper at Engineers’ Meeting. And the lede said this:

“Miss Edith Clarke, an electrical engineer at the General Electric Company, appeared yesterday [February 8, 1926] before the midwinter convention of the American Institute of Electrical Engineers at the Engineering Societies Building, 33 West Thirty-ninth Street, and read a paper on “Steady-State Stability in Transmission Systems.”

Later in the article, we learn:

“She was said to be the only woman who had ever addressed the institute... Her paper of yesterday, bristling with graphs and equations and complex mathematical formulae, was one of several in a technical discussion on the transmission of electric power over long distances.”

Clarke, now forty-three years old, had reached the pinnacle in her profession though a woman in a sea of men. When she entered the historic Engineering Societies Building on that momentous Monday, which still stands and serves engineering associations, to deliver her speech, Clarke was as famous among the leaders of the electric industry and her peer engineers for her pioneering and practical work as for the distinction, of a woman in what was considered a man’s role.

The electric industry was rapidly growing in the nineteen-twenties, the decade when Clarke gave her historic presentation. It was also a time when the industry was constantly constructing longer transmission lines. But as the mileage of the lines increased, and the electrical loads placed upon them increased too, more system instability problems and more acute problems arose.

The existing mathematical models for power transmission had been built for shorter lines with lesser loads. By instead applying the method of symmetrical components, Clarke revolutionized how the industry could overcome the instability problems that were cropping up and construct lines that were greater in length and load.