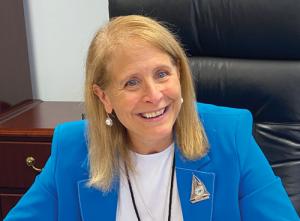 “I have an extensive background in the industry. I started right before law school. It was hard to get a job back in the early eighties, but I got a job as a Xerox girl at a law firm.

After a couple of years, I decided, hey, I could do that, I could be a lawyer, and I was tired of giving all that information to the lawyers. I went to law school and then got a job with a firm that did energy law. That’s how it was back then. When you worked for a law firm, you did what they did, and that’s how I started.

After a couple of years, I moved to Baltimore and decided I didn’t want to drive into Washington anymore. I met someone at Baltimore Gas & Electric at a conference and said, I’d be interested in working with you. I got that job.

It’s hard to know exactly how I was appointed because I have no political connections whatsoever. Our Governor had said when he first started that he was interested in appointing people who had expertise in the field to these various spots. I suspect that’s how I landed here, because I had a lot of experience.”