On April 19, NRECA CEO Jim Matheson talked about the three big issues electric co-op leaders are discussing this week in meetings with the U.S. Congress. These are some of the most interesting things Matheson said: 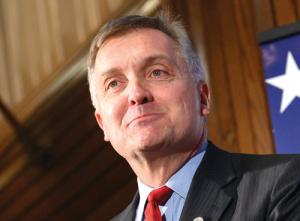 As we're looking at all kinds of potential transitions in the energy sector, the tax code is often used to provide incentives. And [there’s] something that's always been a challenge for us. And quite frankly, for the municipal utilities as well. We don't pay federal taxes. Federal policies trying to incent certain behavior or certain technology, we don't face that same incentive.

Between municipals and co-ops, that's about thirty percent of the electric generation in this country. So we're asking for Congress, if they want to use tax incentives to encourage a particular technology or a behavior, we want some type of parity. Where we're at the table as well in terms of some direct payment function. So that those incentives also inure to the electric cooperative sector. Again, real good bipartisan support when we talked to members of Congress. I think they get it.

People can set goal X or goal Y or goal Z. But in our business, we think about that person at the end of the line and are the lights going to go on whenever they flip the switch and can they afford it? [Rural co-ops] serve ninety-two percent of all the persistent poverty counties in America.

So when we talk about reliable and affordable, and I know everyone in the energy sector says reliable and affordable, we really mean it. We really do. And as a consumer-owned entity where we don't have shareholders to fall back on, those are the questions we're asking about any proposed [carbon dioxide emissions] standard or target is, if you want to hit that target, how are you going to do it?

And you talk to a lot of people in the utility sector, they talk about achieving certain levels of decarbonization. You get to fifty percent, sixty percent, seventy percent, whatever it is, there's a path, a certain way. But there's that last increment [to reach decarbonization] where it's really an unknown.

When I joined NRECA, I thought I'd always be talking about energy and electricity issues, and we do talk a lot about that. But I talk about telecom a lot, too.

The bottom line is whatever federal policies we've had in place and whatever funds we put out from a public policy perspective, it hasn't worked for rural America. We still have twenty-three million people without access to broadband in rural America. We think that there are better ways to go about doing this.

We want to make sure the [Federal Communications Commission], in this latest auction, is appropriately evaluating every initial bid winner to make sure that they're both economically and technically viable in terms of doing what they say they can do. Because too often we've seen our consumers in rural America left behind on broadband investment. And in this day and age, broadband is just an essential aspect of life.

One [issue] is the debt that co-ops hold to the Rural Utilities Service at the [U.S. Department of Agriculture]. We can't refinance that without paying a pre-payment penalty. This is an anachronism, in my opinion, from several decades ago when lots of financing instruments had pre-payment penalties.

Home mortgages used to have that for a lot of people too, way back when. The financial services sector has evolved where those don't exist as much as they used to. But in our case, we need an Act of Congress to change it.

So while the rest of American businesses have been able to take advantage of these historically low interest rates and refinance their debt at lower cost of capital, it's not worth it for us to do it with the pre-payment penalty. The economics don't work.

[Reforming the pre-payment penalty policy] would mean a lot to co-ops… Hundreds of our members across the country hold debt with the Rural Utilities Service. It's around forty-three billion [dollars], forty-four billion, in that range.

If we lower our cost of capital, that directly benefits all of our consumers… We have tremendous bipartisan support… Our Senate leads are Senator Smith from Minnesota, Hoeven from North Dakota, Boozman from Arkansas, and Sinema from Arizona… I have yet to meet anyone who doesn't support this idea, by the way. Nonetheless, we know it's hard to get anything through Congress these days.