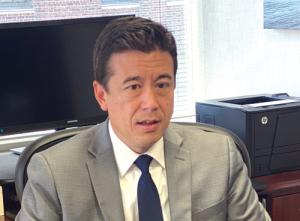 “With three years of my term now over and two years remaining, I’m beginning to think about the legacy I want to leave behind. I’d like to think I’ve implemented a number of efficiencies in terms of case processing, order writing, and improving the responsiveness of our customer-facing operations.

For example, we had an arcane requirement that every filing include seventeen hard copies. Imagine a rate case with thousands of pages, and seventeen paper copies of each. I initially stepped it down to twelve copies with the intent of getting to zero. Then COVID helped me accelerate going from twelve to zero overnight.

Transportation electrification is also a big issue for me. As an EV owner, advocate, and enthusiast, I hope to get more electric vehicles on the road in the next few years. Not only do EVs eliminate harmful tailpipe emissions, but the drive experience and technology are superior to operating a gas-powered vehicle.

However, consumers aren’t going to buy EVs if they don’t see an adequate number of charging stations on the roads. I am proud we approved a number of policies to get more Marylanders into EVs, including authorizing our five largest electric utilities to own and operate over one thousand public charging stations across the state. We have a goal of registering three hundred thousand EVs in Maryland by 2025 and I’m optimistic we’ll get there in the next few years.

Another accomplishment I’m proud of is my refocusing of the office that handles consumer complaints. We rebranded it from the Office of External Relations to the Consumer Affairs Division and created a new Compliance and Enforcement Unit. CEU’s focus is to work with customers who have experienced problems with their energy supplier, particularly retail energy suppliers, whether it be electricity or natural gas.

Unfortunately, we have seen plenty of bad actors engaging in deceptive marketing practices, particularly door-to-door. In response, over the past two years, we’ve launched at least six investigations and prosecutorial actions against third-party energy suppliers with track records of misleading our utility customers.

More investigations are underway and we’re not slowing down. In fact, we’re expanding the size of our enforcement team. Hopefully, the accomplishments of this unit and our emphasis on fostering a culture of compliance will be one piece of my legacy when my term ends.

I am also proud of the Commission’s rise in Wall Street’s regulatory rankings. For many years, we were ranked by the investor community as having the worst regulatory climate in the country, as we were literally tied for last place along with another regulatory body. But that’s turning around quickly.

In August 2019 we received our first upgrade since July 1993, followed by two more upgrades earlier this year. Since these rankings influence everything from analyst investment recommendations to the cost of capital for our regulated utilities, a better ranking benefits the bottom line of all Marylanders.

These accomplishments and recognition are a testament to the work of the Commission’s staff – and reflects our willingness to embrace new regulatory tools such as multi-year rate plans and performance incentive mechanisms. The investment community is paying close attention to every action we’re taking, and those efforts are paying off for both our regulated utilities and their customers.”