In recent years, EPRI has taken on the biggest energy issues of our time. Here comes another big one, the Climate REsilience and ADaptation initiative, or Climate READi for short. This project aims to harden systems for the more adverse environmental conditions ahead. 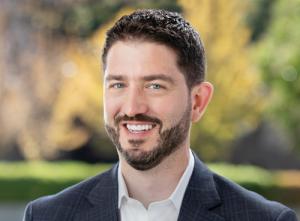 PUF's Steve Mitnick: How does PG&E view the challenge to electric system resilience by climate change?

Jason Glickman: Well, first of all, I would say, challenges plural. Think about our service area.

PG&E serves electricity and gas to forty percent of California's population, or sixteen million people, across seventy thousand square miles, with a huge diversity of climates and microclimates.

Our customers live in cities, on the coast, in the foothills, in mountain ranges, and in the Central Valley. We have a large population that lives in the wildland urban interface, not only because it is beautiful, but because of housing availability and affordability.

Impacts can take the form of heat, which has always been a factor in the Central Valley, but a few weeks ago we saw an extreme heat wave statewide. It was over one hundred ten degrees in many parts of our territory and even San Francisco reached highs over ninety. Impacts will also come in the form of sea level rise around the Bay Area and along the coast, extreme rain and snow events, and wildfire.

Something we've had to think about is taking a longer-term view, even longer-term than we typically do in electric T&D planning. For example, we are building climate data into our design standards.

I just had this conversation with our team about design standards for distribution transformers.

We were ahead of the curve with design standards updates a few years back, using data from a 2006 heat wave to reflect changing climate zones in our territory.

In the last couple of years, we've been updating them again using forward-looking climate data as we expect heat events to become more commonplace in the future. Extreme heat events are not going to be a one-time event, at the same time that load is growing from electric vehicles and building electrification.

We're also taking a new approach to our planning. We're looking at the distribution system regionally based on specific characteristics.

For example, we are looking at population density, environmental justice considerations, and exposure of the circuits to wildfire risk. Then, we are developing grid investment plans that are distinct to each of those regions. So, we try to recognize the diversity of the environments we operate in, and the system needs.

PUF: What's the company's overriding strategies for the challenges? You have to deal with timing too.

Jason Glickman: The challenges are real. We have a unique opportunity with our service area in terms of the strategy for how we meet those challenges. I like to say we have more tools in our toolkit than just about any utility in the world.

We have the largest distributed solar installed base in the country, and if we could get all those customers to add storage, that would be a game changer.

We already have electric vehicles that are the equivalent of seven thousand megawatts of capacity zipping around our territory. Right now, the electrons flow one way to those cars.

What happens when those become two-way assets for a peak summer day?

Our strategy for a resilient energy system is rooted in the data that says a diversity of resources and tools and technologies is your friend.

Let me give you an example. Sometimes, we will have to call a Public Safety Power Shutoff to proactively de-energize parts of the system for wind-related wildfire risk.

They can drive to the central business district or main street corridor that is still energized, because it's been undergrounded. It's had a bunch of capacity added to it. Then go do a DC fast charge to top up their car when they go pick up groceries. They can ride out the outage — this is resiliency in action.

PUF: What about flooding conditions and storms?

Jason Glickman: Intense, heavy precipitation is a challenge for our energy system and our communities here in California. We had a big, low snow event early this year.

As part of our after action review, I asked the engineering team, what could we have done to have reduced the outage duration for those customers? Are they all going to be undergrounded? Are some of them at the edge to the natural gas system, and could we explore natural gas powered microgrids?

The answer came back that the vast majority of the outage minutes could have been mitigated by undergrounding. Yet another use case for undergrounding, but this time to combat hazardous winter storm conditions, not just a solution for summer wildfires.

We need creative thinking to tackle these problems with new, innovative solutions that provide what I like to call, two-fers and three-fers — investing the dollars once in infrastructure and delivering two to three times the value for customers.

We also need to be imagining compounding scenarios from a climate risk perspective. Here's a real-world example. There are large lightning-caused fires, making it smoky so solar production is down. Air quality is poor, everyone is inside, and they are running their air conditioners and air purifiers, so load is high. The fires also threaten some transmission lines, so we have less import capacity.

Or this last week, we had the prolonged heat wave that had a much larger geographic extent than prior heat events. As a result, this heat event both placed stress to local distribution equipment, while also creating a systemwide capacity event that pushed the limits of the bulk energy system.

I think one of the things we have to do as an industry is get creative and imagine these compounding risks that go beyond our existing models. Those what if scenarios because they will materialize. And in fact, they already are.

For us that means hardening against multiple risks to keep our customers safe and to help them prosper in the face of climate change.