Mackinnon Lawrence is a director in Guidehouse’s global Energy practice and leads Guidehouse Insights. He is responsible for overall strategy and operations, including management of a global analyst team, development of the Firm’s Energy Cloud thought leadership framework, and client engagements supporting utility, oil & gas, telecom, manufacturing, IT, and consumer tech companies.

For seven years running, Guidehouse and Public Utilities Fortnightly have taken the pulse of the power industry via a survey of executives with North American utilities, regulatory bodies, and product and service vendors. In 2022, responses underscore many of the same concerns and opinions expressed in prior years — for example, nearly two-thirds of respondents still indicate that rapidly growing distributed energy resources, such as solar and electric vehicles, are the most disruptive forces the industry faces today. 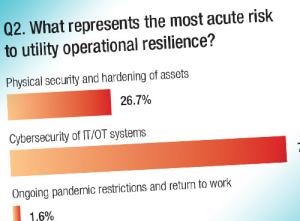 But there are also new focus areas for an industry facing unprecedented challenges and change. For example, resilience is increasingly top of mind — despite the growing frequency and severity of extreme weather events and fires — but it is cybersecurity, rather than physical security and grid hardening, where utility industry participants see the greatest risk currently. Meanwhile, emerging opportunities, such as in electrification of buildings and transportation, as well as in the Infrastructure Investment and Jobs Act (the Act), are giving the industry hope.

Nearly three-quarters of 258 survey participants indicated that cybersecurity of IT/OT systems represents the most acute risk to utility operations resilience. About 28% of respondents said physical security and asset-hardening are the greatest risk, while just a handful cited the ongoing pandemic.

High-profile cyberattacks on the energy industry have certainly made cybersecurity a focus, but it is notable that far greater investment is taking place in grid-hardening technologies. Guidehouse Insights estimates that some $820 billion will be invested in global grid enhancements over the next decade — of that just $31.5 billion can be attributed to cybersecurity.

Of course, connected systems such as smart-metering infrastructure or grid management systems such as ADMS and distributed energy resource management systems (DERMS), are a significant part of that multibillion-dollar overall investment — and here is where increased cyber-risk emerges. As a growing number of assets throughout the grid become connected and integrated into sophisticated software systems, the surface area for a cyberattack grows exponentially. 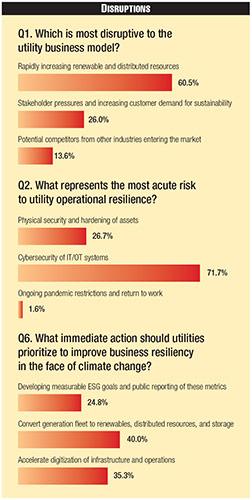 And, as opposed to physical threats that involve more concentrated damage — e.g., a tornado knocking out a single substation or a backdoor to the IT systems running a utility's entire power grid — it means that the damage inflicted can cover a more devastating portion of the system. In preparation for increased cyberthreats, survey respondents said that investments in advanced asset, information, and network control technologies, followed by accelerated internal training efforts, should be prioritized (46% and 41% respectively).

In addition to cybersecurity, business resilience is another key focus for a utility industry facing growing disruption and competition. As reflected in the survey, utilities face an ever-expanding array of stakeholders in the Energy Transition, which encompasses both potential partners and competitors.

As in prior years, tech and telecom concerns were seen as the greatest competitive threat (59%) — but notably, auto, and oil and gas companies are of growing concern as they expand investments in renewable alternatives to conventional energy fuels. This year, more than 20% of respondents indicated these competitors pose the greatest threat, compared to just 13% in 2019.

To bolster business resilience, survey participants indicate that converting to sustainable generation sources and increasing investment in digital technologies are top priorities, at 40% and 35%, respectively. This will be emphasized by a shift toward DERs, which are key to increasing resilience, but must be enabled through digital tools. In its Global DER forecast database, Guidehouse Insights expects that cumulative DER will account for more than 28% of total installed capacity in 2030, up from less than 22% in 2022. 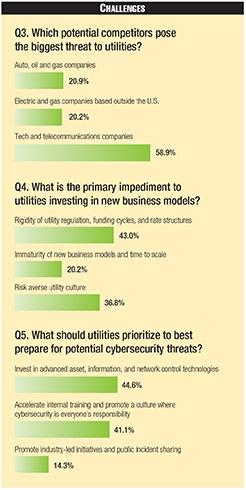 In order to manage the increasingly diverse and distributed sources of generation, the integration of digital technologies will be critical. Thirty-five percent of respondents agreed that accelerating digital investments should be prioritized by utilities to improve business resilience in the face of climate change.

Grid modernization investments are well underway. Guidehouse Insights expects global investment in DERMS to increase by an order of magnitude between 2021 and 2031, growing from $240 million to nearly $2.4 billion worldwide, for a better than 23% compound annual growth rate.

Machine learning and analytics — aka AI — are also projected to be adopted at an impressive pace. Utility analytics investments are forecast to grow at an estimated 14% compound annual growth rate through 2030.

AI will help manage a diverse portfolio of power generation sources. On any given day, a utility can choose hydroelectric power, local DER, or power from a fossil fuel generation plant, among others, to meet load requirements. With AI, utilities will be able to blend these available resources to meet changing demand in real time, while also maintaining a high level of service quality. 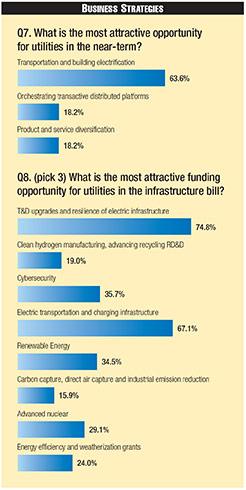 Indeed, years after the term smart grid was first bandied about, the world's largest machine is transforming quickly into a more intelligent, responsive, and self-healing system, a necessity for true resilience in the face of climate change.

Industry disruption also means new opportunities for incumbent utilities, and consistent with previous years, survey participants in 2022 believe the most attractive near-term opportunities will be found in the electrification of buildings and transportation. Not only will growth in these areas offset falling load due to energy efficiency and wider end-user ownership of renewables, but they also present opportunities for better real-time grid-edge management and balancing.

This year, less than 20% felt it provides the most attractive near-term opportunity. This is likely due to inconsistent and often restrictive regulatory regimes seen across the states, as well as market immaturity and conservative industry culture — all barriers to new business models cited in the survey.

In keeping with the themes seen throughout the survey, when questioned about the most attractive opportunities made available to the industry by the Act, respondents focused on transmission and distribution (T&D) upgrades and resilience, transportation electrification, and cybersecurity (75%, 67%, and 36%, respectively).

Considering that cybersecurity was deemed, by far, the greatest risk to utility operational resilience, however, it's interesting that twice as many respondents chose T&D upgrades versus cybersecurity. This could simply reflect the higher cost of physical infrastructure upgrades compared with cyber upgrades, although arguably the long-term impact of cybersecurity investments to resilience could be greater.

Renewable energy, advanced nuclear, and energy efficiency/weatherization were also selected by 24%-34% of respondents as attractive opportunities, while carbon capture and hydrogen technologies garnered less interest. Guidehouse Insights expects that renewables will account for almost 40% of the total installed capacity in 2030, up from 31% in 2022. This could further accelerate once the full impact of the Russian war in Ukraine is understood.

The Act makes $65 billion available for long-overdue upgrades to the power grid, and another $12.5 billion in support of EV adoption, charging infrastructure, and adoption of low-carbon and zero-emission school buses nationwide. Market momentum for EVs is growing considerably across all vehicle segments — passenger cars, pick-up trucks, buses, and commercial trucks.

Guidehouse Insights projects one of three new vehicle sales in North America will be an EV by 2030, up from the one of 22 in 2021. EVs represent significant new and novel loads for utilities. Investment in smart charging technologies will be a component of utility management strategies. However, in many cases, such as electrification of heavy commercial vehicles, T&D upgrades, and resilience investments and strategies will also be required.

At the same time, utilities still feel the rigidity of regulation, funding cycles, and rate structures are the primary impediments to new business model investments (43%), but by embracing emerging opportunities around electrification and the shifting generation mix, they can continue to compete effectively while supporting sustainability and ESG priorities.

"May you live in interesting times" is generally considered a curse rather than a blessing. The utility industry today is undoubtedly living through interesting times, but it's encouraging to see increased focus on tangible, near-term investments that can have a direct impact on long-term grid and business resilience and renewables integration — an important tool in the fight against climate change.