Dave Edwards is director and advocate for hydrogen energy at Air Liquide. 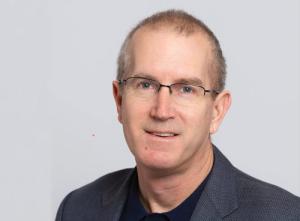 PUF's Steve Mitnick: Talk about Air Liquide and your role there.

Dave Edwards: I have an exciting position within Air Liquide. My title is director and advocate for hydrogen energy. What that means is I am outward looking from the company and trying to establish partnerships, stakeholders, and communications with all the people engaged in the hydrogen economy of the future.

I work with our government affairs team in D.C. In the state capitals, I work with our communications teams for events like this, for example, and I represent not just our company, but a lot of times our industry and the potential for our industry trade associations and public events on behalf of the hydrogen industry. Within Air Liquide, hydrogen provides a unique opportunity for growth and to engage with the energy transformation.

It's an exciting role and part of a company that's committed to this transition. The investments we've made in low carbon production and in establishing, maintaining, and enabling this new market for the use of hydrogen in things like fuel cells, power production, and industry, makes for an exciting time.

PUF: There's always been a lot of relationship with the industry as a major customer, but now it looks like you're going to get major into it as a supplier and partner.

Dave Edwards: Yes. One of the interesting things about the new hydrogen economy is that a company like Air Liquide is all of a sudden involved with companies we might not have dealt with, at least not in the same way.

It's being a hydrogen or an energy provider to the power generation industry, for example, instead of a power off taker. In the past, we've paid our electric bill, but now we're helping generate the electricity that goes into that.

We're a major consumer of electricity, of renewable natural gas, and of other feed stocks. All of a sudden, we find ourselves not just on the demand side, but the supply side of a lot of those energies systems. If you think about other sectors for hydrogen, we have partners in transportation. In the past, it would've been unusual for us to have partners with an automaker, for example.

Maybe we're providing them with welding gases, but now we're partners as a fuel provider to enable fuel cell cars, for example. The world of who our partners are, who our customers are, and who our competitors are, seems to change on a daily basis. It makes for a dynamic market today.

PUF: There's this distinctive project at one of the NYPA plants in the New York area, and you are involved in that as well as other big players, like GE and EPRI. How do you fit into that project and what makes that project distinctive and maybe a major step forward?

Dave Edwards: That project is forward thinking. What we're doing in that project is demonstrating that existing power production facilities, essentially stationary gas turbines, can use not only the natural gas they've used traditionally, but can now blend hydrogen into that natural gas stream to help decarbonize their process. With this specific example, we're bringing as much as thirty percent hydrogen into the feedstock.

That hydrogen is coming from renewable zero carbon sources. We produce it from hydropower using electrolysis, for example. We then liquefy it, bring it to the region and distribute it for this project.

It's representative of how we could do a significant carbon reduction of our power generation sector with existing assets, which is critical. This is forward thinking because it will be some time before we can introduce hydrogen into the natural gas grid, which is the ultimate solution here.

This demonstrates that the technology's available, that the current equipment can handle these kinds of conditions and allows us to look at issues like efficiency and operating conditions. One of the most important aspects of the project is all the information produced is going to be made public so others can learn from it.

It's not just for this one specific application on Long Island. It's for all of the thousands of stationary power generators of similar types throughout the country and the world.

PUF: What was your role and how physically was this done?

Dave Edwards: At the simplest level, this is delivery of hydrogen to a customer who needed it as it would be for any other market. Airgas, an Air Liquide company with operations throughout the United States, distributes hydrogen all over the country by truck, as a liquid or as a compressed gas.

If you go to the Gulf Coast, we do it by pipeline. In that sense, it's a rather ordinary business transaction. What's unique about this is the request that it be zero carbon hydrogen. We looked for our sources and found one based on hydropower using electrolysis, which allows us to bring fully renewable zero carbon hydrogen into the project.

For the project, they're going to run tests in a number of tranches, and we will be bringing hydrogen for those runs. The turbine won't run continuously over the entire operation, it'll run for a few days on hydrogen in groups. What we will do is bring by truck over road that hydrogen to the site.

PUF: What are the characteristics here of hydrogen that make it so important as far as reducing carbon dioxide emissions?

Dave Edwards: Hydrogen can be produced from a number of different feed stocks, but one of the best ways to produce low carbon hydrogen is from electrolysis, which is taking electricity to split a water molecule.

You may have done this in your elementary or a junior high class where you drop a battery in a glass of water and watch the bubbles. Some of those bubbles are hydrogen. We do that on an industrial scale, with much more complex equipment, more efficient. If you use zero carbon electricity to produce zero carbon hydrogen, you have this as a solution.

You might wonder, why do you take electricity to produce hydrogen and then hydrogen to produce electricity? What it enables is storage. If you have excess or curtailed power, you have the opportunity to store it as a hydrogen molecule.

Then we can distribute it back to the grid, using the demonstration project that we're doing here in New York. It reproduces that electricity when you need it in the turbine by reintroducing that hydrogen. It provides this large-scale energy storage solution. At the same time, it helps decarbonize anybody else that might be using the natural gas in that distribution system, for example.

PUF: What do we have to be testing in the next three, five years that'll get close to that point?

Dave Edwards: The biggest thing we need to do is invest in the scale of high hydrogen availability and scale brings things like cost reduction. Scale requires investment, investment in low carbon production, for example.

It requires the distribution systems for that hydrogen. Producing large quantities of low carbon, low-cost hydrogen then enables a whole bunch of markets. The first market you might think about is as a transportation fuel. You can put it into a fuel cell vehicle, a personal vehicle, or more likely some of the larger vehicles, heavy duty trucks, rail, even shipping, for example.

It's likely to be the very first market because that's difficult to decarbonize and a place where a fuel cell solution is ideal. But for other markets like the industrial markets, think about ammonia. Ammonia is one of the singularly largest produced chemicals on the planet.

Right now, the feed stock for that is hydrogen based on natural gas. We can displace that hydrogen with low carbon hydrogen and result in low carbon ammonia for the agricultural businesses, for example.

There are other industrial examples that are similar. In the last sector, the one we're talking about here today is this power generation sector. As hydrogen production becomes available, storage off of the grid becomes available. Then it's returning that to the grid as electricity or using that molecule in these other sectors.

One critical part of the value of hydrogen isn't that it solves any single problem. Instead, it can be used across these different energy areas. You can use it in industry. You can use it as a reactive molecule to create next generation plastics.

PUF: Are we going to hit a point in some reasonable time in the future, where it'll be economic and widespread and can make a difference?

Dave Edwards: Yes. We're in the middle of that transition now. We're making the same kind of transitions in hydrogen that things like wind and solar made ten to fifteen years ago.

The Department of Energy recently put together what they're calling an Earth Shot program. Within one decade they'll have one kilogram of hydrogen costing a dollar, which would be and will be revolutionary.

That is a significant reduction from where costs are today, especially for zero carbon hydrogen, as we think about electrolysis, it's significantly more than a dollar per kilogram today. Those kinds of targets will revolutionize the availability of low-cost hydrogen at scale.

PUF: How did that come together with all of you working together?

Dave Edwards: It's been an excellent project in that we have strong commitment from NYPA, and GE, and we have a lot of informative oversight with EPRI, and what it does is it makes the project visible.

A lot of people are aware we're doing this, and they can look at our project and results and say, how does that translate to my power infrastructure. They can learn from that directly, which is going to be the most powerful outcome.

These are learnings that are made public and can then be broadcast across the power generating industry. The fact that it's the primary goal from the beginning is quite powerful. I know that NYPA has a number of these stationary operating plants that are likely to be converted as part of a long-term vision.