PUF's Steve Mitnick: This is such an interesting project. Give an overview. 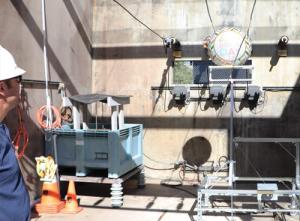 Dave Geier: I'm the Interim Chief Operating Officer for SDG&E. It's an exciting program because who doesn't love metallic balloons, that is until they get stuck in the power lines.

By their nature, the metallic balloons conduct electricity. If someone lets them go, they float.

Once they get up in the power line, they become a short circuit and cause outages on the power grid.

In addition to causing power outages, balloons are a fire hazard because when they cause a short circuit, there are always sparks associated with that short. Those sparks can cause a fire. We started this project, not only for the outages we see across our system, but also because they always have the potential of causing many kinds of fires, including wildfires. 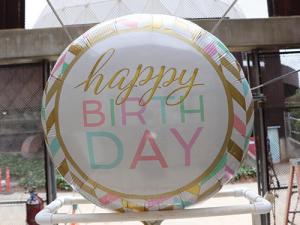 Wildfires are one of our big risks. We have an average of three or four fires every year started by metallic balloons getting in our lines. It costs a lot of money to fix it if they cause a power outage. The costs are over a million dollars in repairs. It's also a safety issue.

We started this as a win-win situation. There have been companies in the past that have decided they're going to outlaw Mylar or metallic balloons. There have been people trying to run legislation in California and we were participants in that, but a lot of people like those balloons, so we never were successful.

Then the thought came to us of, what if we had a balloon that has the same characteristics, was shiny, could hold helium for a long period of time, and be non-conductive, meaning it would not cause short circuits if it got in our power lines. That's where we started.

None of us knew much about the balloon industry when we began. We have some engineers that worked on this and we teamed up with thin film experts that do the filming of the balloons. 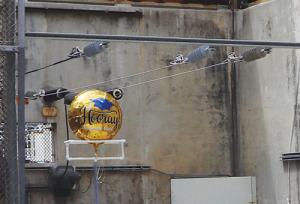 A normal foil balloons from a nearby retail store.

Instead of being in conflict with the balloon industry, we reached out to one of the large balloon manufacturers and said, we'd like to work with you on this. It was interesting because we found them to be receptive once we educated them on the risks. The balloon industry knows their balloons can cause power outages.

Once we educated them on the severity and public safety risk, they were on board with trying to come up with a solution. We've been working on this project for about eight years now.

We went to Minnesota to one of the balloon manufacturers and worked with them to build a prototype. They put the new balloon that was non-conductive next to the standard metallic balloon and they looked almost exactly the same. From the balloon manufacturer's point of view, that's what they needed. It wasn't holding the helium quite as well as they'd like, and they knew there were tweaks needed.

If you were to walk into a store and buy this metallic balloon, you couldn't tell the difference and it would be non-conductive. From a safety perspective, by being non-conductive, if they float up into our line, it's not going to cause a power outage. 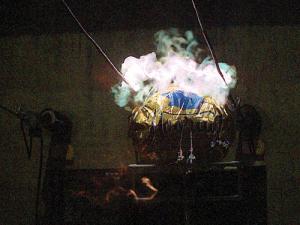 Example of a traditional foil balloon causing an electrical fault on a distribution line at a testing facility.

The concept is to have this win-win where everybody gets to keep their cheerful balloon but when those balloons get free and float up into power lines, they're not going to cause the power outage.

PUF: Can the balloons still display the character faces and images like that?

Dave Geier: Absolutely. That's the beauty of this. The balloon manufacturers, once they saw they could put the same graphics on these balloons, were more excited than we were because they knew they could have a solution.

PUF: Steve, you're the Manager of Advanced Clean Technology Innovations. You probably didn't think when you got that job that it would include working on making a new balloon that you could get in the big box stores. How did you get involved? 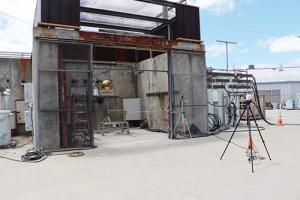 Normal foil balloons from a nearby retail store were also tested in the same configuration, and immediately caused an electrical short.

Steve Johnston: Prior to working at SDG&E, I spent a bit of time in Silicon Valley. But I got interested in the energy industry for a variety of reasons. SDG&E stood out as being one of those incredibly innovative companies.

Since coming into this company, I've been assigned to a wide variety of new and innovative projects, both in customer service and engineering. In some of my first interactions with Dave, SDG&E was launching the Renewable Meter Adapter, which was another innovative product. Dave asked me to get involved in this other project, which happened to be the balloons.

I was used to SDG&E doing creative work, being an early adopter of smart meters, and a pioneer of wildfire mitigation innovations, but working with balloons was out there. Part of the reason it's taken eight years is there aren't a lot of people that work at that interface between balloons and the electric grid.

While we were looking for thin film experts that could work with our electrical engineers, the balloon industry was trying to figure out this problem. But the balloon folks don't know much about the electric grid.

The more I got involved, and worked with Dave, I understood the impact that balloons have. Balloons cause around five percent of our outages each year. They also cause fires. Fortunately, none of those fires have gotten out of control but they're still fires that SDG&E needs to report to the Commission.

When you think of the outages and the fires as well as the cost to our ratepayers to replace the conductors and replace equipment that gets damaged when a balloon causes a short, all of those are real risks with real costs. I've been happy to stick with it.

As I've changed jobs, I had the opportunity to hand it off to somebody else, but I haven't wanted to because it is a fun project to work on. You can't have a conversation about balloons without smiling. I've been grateful that Dave's always been the driver for this, and he's kept me involved even though I've changed roles. It's a great project to work on.

PUF: There's a team, so it's not just the two of you. There's Christian Henderson, Michael Colburn, and Faton Bacaj. How did they react when you told them they would be working with balloons?

Dave Geier: Everybody likes this idea of trying to find a solution. We have some of the prototypes floating around the office and every time you bring them out, people think wow, that's cool.

It's one of those things where most utilities understand it's a burden, but they didn't take the time to do anything about it. I've got a great engineering team that Christian and Mike are part of, and they realized the problem and were committed to finding a solution.

We made the commitment after the fires in 2007, that we were going to do everything possible to eliminate risk around wildfires. With balloons, if someone lets them go, they just float around. They're just trying to find a home, and if that home is in our wire, that's not good.

We have control over the age of our infrastructure, and how we do maintenance, but we don't have much control over balloons floating into our line. That was the big motivator behind this.

I give the balloon industry a lot of credit that they didn't fight this and there are some capital investments they have to do to make this happen. They're working through that and it's going to take a while.

We've made the decision that we're going to go through the IEEE to get testing standards for this. In the writeup we gave to them, we tested that here at SDG&E initially. We pushed the balloons right up into the overhead wire in a controlled setting in our skills training center, and it didn't short out.

We only have twelve thousand volts here. That's the highest we have in our system. We also went up to PG&E where they have a higher voltage test lab. They have a twenty-one kilovolt system in their test center.

To create a standard, you need a national association to say, here's the criteria. That's where we're at right now. We're going through IEEE standard and some NEETRAC testing to move this forward.

PUF: Is word getting out across the industry that this problem might be mitigated?

Dave Geier: I think it is. We've probably worked on the west coast more than nationwide, but I know there have been some articles written about this technology. A big driver of this is reducing the wildfire risk.

Steve Johnston: We reached out to IEEE. Right now, we have about eighteen industry organizations involved. Those are other utilities, and we have a balloon manufacturer also working in the IEEE.

In the surveys we've done, there are more balloon outages tracked in California, especially Southern California, compared to other places in the states.

But as we have published articles, the word has been getting out. When we published a recent article earlier this year, I got a phone call from somebody in Florida Power & Light asking about it, so we got them to join IEEE.

Now we've also got NV Energy in Nevada participating. Every utility that we've seen has this problem to a varying degree. We've been bringing them in as they hear about it.

PUF: How does this fit into you creating a culture that promotes innovation across the board?

Dave Geier: It is a great example of our culture of innovation and continuous improvement. We have problems just like every other utility out there. We encourage our engineers and others to think about it as to, how can we find innovative solutions to those problems so we can continue to be better? This is just another example.

We have the Renewable Meter Adapter, which was one of our patented devices. It's a collar that goes on meter sockets that adds an additional breaker. That was a win-win because it saves the customer from rewiring their whole electric panel to add solar to their homes. It saves the customer a lot of money and makes it easy for installation for the solar installers. For us, it cuts down the time to hook up these new solar facilities on customers' property.

We've looked for things that cause us problems, and then we have a culture of, how can we solve that problem? I'm proud that we use experts outside of the utility industry. In this case, we went to the balloon manufacturers.

For the meter adapter, we went to the solar manufacturers. For our wildfire work, the person that runs our Emergency Operation Center was a forty-year fire chief. We also have meteorologists on staff.

One thing that's changed in the last fifteen years at SDG&E is that before we had a culture of, we'll just hire a former electrical engineer and they'll fix the problem, no matter what kind of problem it is.

Now we say, we want to go out, grab these experts in these various areas, bring them into the utility, teach them about the utility, and bring in their expertise on whatever subject matter it is. It's been productive for us.

Balloons are a little special because they are cheerful. Everybody would like to see this problem go away, so they can keep their balloons and be happy.