Imperative to Innovate is Accelerating

Some might have thought innovation in our industry was no more than a fad. As with other temporarily-popular notions in our past, such as diversification into disparate businesses or acquisition of utilities overseas, maybe the imperative to innovate would be a priority for a few years before falling into the background behind the next big thing. 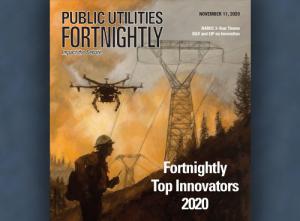 I guess not. If anything, the imperative to innovate at the nation's electric, natural gas, and water utilities is accelerating.

Indeed, the industry has institutionalized innovation. The Electric Power Research Institute now has the Incubatenergy Labs Challenge. There's the Ameren Innovation Center and the Southern Company Energy Innovation Center, and many more such skunkworks at utilities throughout the country. A number of them pool their ideas and resources through Energy Impact Partners. Xcel Energy and NextEra are setting new records seemingly all the time in wind farm capacity factors. California's utilities are using drones, sensors, artificial intelligence, and machine learning to reduce wildfire risk in ways that would seem like science fiction a few years ago. And, these are only a few examples of how innovation has now been fully integrated in our industry.

Need further proof? Just read through this year's special issue of PUF on innovation, herein. Check out what we wrote about Zachary Wassenberg. He's our Fortnightly Foremost Innovator in wearables. This engineer at Burns & McDonnell put virtual reality into hard hats. Or, see what we wrote about Paul Toub and Matt Wallace of PPL Electric Utilities. They're the two-man team that developed a collar for customer meters to expedite customers' solar installs.

The innovation that this issue illustrates is hardly a guy thing. There are so many talented women innovators profiled in these pages, and more than thirty percent of all those nominated are women. You only need to look through the interview with Southern California Edison's Kathy Hidalgo, Alyssa Grigoryan, Sunandra Singh, and Lucero Vargas, the four-women team that we named the Fortnightly Foremost Innovator in drones. If this wasn't the very best interview PUF has published this year it comes mighty close.

The industry's innovators are even reinventing party balloons. That's right, Faton Bacaj, Michael Colburn, Dave Geier, Christian Henderson, and Stephen Johnson at San Diego Gas & Electric are insuring that the cute balloons at your kid's birthday celebration can't fly into a power line, blacking out your neighborhood, or worse, sparking a fire in the local brush.

While we're talking about breaking the mold and innovating, this magazine's lead article smashes precedent to pieces. The precedent of the past, that's now being discarded, is the tradition of having a brand new theme for NARUC for each one-year term of NARUC's president.

Authored by the three state Commissioners who are expected to serve as NARUC President for the next three years, starting today actually, the article announces NARUC's theme for this three-year period, mid-November 2020 through mid-November 2023. Commissioners Kjellander's, Jagdmann's and Caron's theme "seeks to explore the many different emerging technologies and innovations that will impact electricity, natural gas, telecommunications, and water/wastewater utilities." And, very notably, "the theme will include a discussion on the role of regulation ... [and] include a discussion of when regulators should be innovators, when they should get out of the way, and when they should just say no."

This precedent-smashing article ends with this unique invitation:

"And perhaps through exposure of our theme in the Public Utilities Fortnightly's special issue on innovation, this publication's readers might take an interest in helping NARUC pursue this conversation far into the future."

There's plenty in this issue of PUF to peruse. Please pay particular attention to the leadership voices herein. Martin Travers, the group president at Black & Veatch, lays out his views, quite eloquently, on where he fits in creating and maintaining an innovative culture within his firm and throughout the industry:

"I encourage anyone who's in a leadership role that change begins with them. The opportunity to experience an innovative culture is highly addictive. People are drawn to it and the success they achieve makes it multiply... [I tell leaders] just embrace it. They will be surprised how quickly cultures of organizations can change when there is encouragement from their leadership that, we're interested in this and we want to strive for innovation for the sake of improving the way we serve our customers and that's at the heart of why we want to do it."